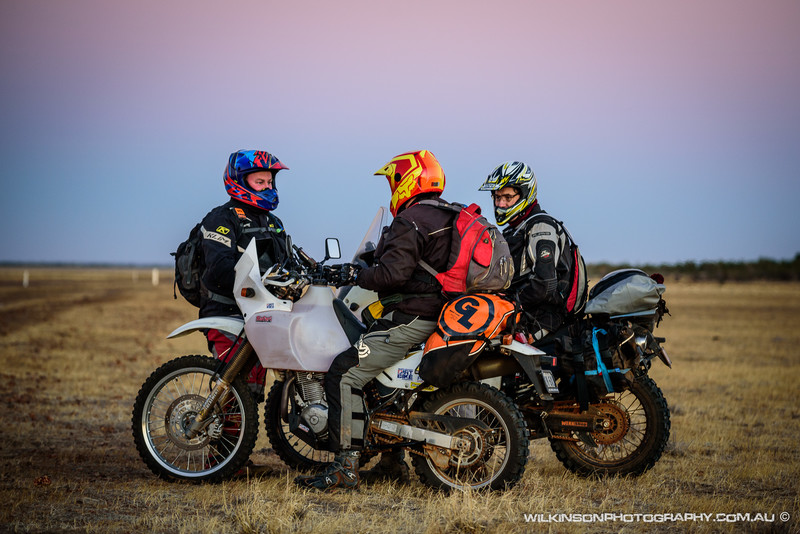 It is a curious bit of trivia that the Simpson Desert takes its name from Alfred Simpson. Mr Simpson was notable for a number of reasons but one of his most enduring legacies is being the owner of the Simpson washing machine company. I stumbled across this piece of information whilst wearing the same dust encrusted clothes for the third consecutive day and the irony of this connection was not lost on me. Having just ridden from dawn till well after dark with a freshly fractured ankle, I felt as though I had been well and truly put through the wringer. Maybe there is something to this washing machine thing after all?

As the world’s largest sand dune desert, the Simpson and its eleven hundred dunes are one of the great frontiers of adventure riding in Australia. Armed with some serious sand skills, a suitable bike and a light pack, the traverse can be broken up into small sections, closely resembling a churned up motocross track. Done right, the track can be ridden as a sequence of whoops, berms and massive dunes to be roosted up. We had riders like that in our group of ten, a number of them in fact. For mere mortals though, the Simpson represents a formidable opponent. It’s a long, relentless sand pit and at times when you are flapping around in the squirrelly tracks of another riders wayward tyre snake, it can be downright daunting.

I still recall an issue of ADB from the early 90’s where “Flash” Farley and Glenn Middleton crossed the desert in the heat of summer. As a teenager, I remember thinking they were mad but the strength of their story put in motion a sense of curiosity that would only be sated as we rolled out of Birdsville one morning before the sun struck the horizon. Peering up at the almost insurmountable collection of ruby red sand grains that make up Big Red, my first thoughts were ones of awe as the sand began to glow under the fuscia hues of a rising sun. This was closely followed by a vastly more practical sense of “why would anyone in their right mind want to ride up that”.

We did of course, just because we could!

Heading east to west on the QAA line the dunes are high and steep but the early hour meant the sand was firmer and traction could be found with commitment. The sight of a shimmering white salt pan was still a welcome relief though, as it entailed a relatively straight forward trek south towards Poeppel’s corner. Lulled into a false sense of security, this is where things turned nasty in the so called “Dunes of Death”. I haven’t seen that name on any map but it sure seemed appropriate as we struck them under a beaming midday sun. The sand changes colour here, signifying a softer consistency that powdered up quickly, making for more than a few failed dune attempts resulting in lengthy extractions. Lindsay Petersen’s bike started to misbehave in this section and without fail his mate Chris “Factory” Kirk was on hand at every junction to push, dig, kick start and generally help out. This is character building country and this pair can hold their heads high in this regard.

We made camp after a solid day in the dunes and Irish stew from a can has never tasted so good. Maybe it was the company, maybe it was the Birdsville Bakery bread. It may have even been the sight of the moon cresting the dune behind our campsite but in all honesty it was probably the sheer relief of parking the bike and rolling out a sleeping bag under the stars.

Amongst the pre-dawn rumblings of camp, someone asked Peter Byrne how he faired sleeping under the stars. Typical of his dry sense of humour, Pete replied:

The second day of our crossing proved to be a real battle, both physically and mentally. Having barely covered ten kilometres, I got caught up on a bit of low scrub and promptly stuck my foot under the WRR, twisting the thing at ninety degrees as I hit the deck. A few choice words rolled off the tongue as pain shot up my leg and I scrabbled in the loose sand to dig my foot out and restore its normal angle. Frustrated by the prospect that the desert might have my measure, I wiggled my toes and felt around inside my boot for something resembling wayward bones. Satisfied that the grinding was minimal, I dragged myself back up onto the bike and kept going before the adrenaline wore off and I thought better of it.

As luck would have it, Geoff “Lefty” Forshaw was extracting his loaded 640 Adventure on the next dune. Perhaps Lefty didn’t see that as being fortuitous but I was happy to have someone to ride with for a while. He made out that the dunes were taking a toll on him but I am sure that the cagey bugger was just keeping an eye on me for a while. Either way, we teamed up and steadily made progress, eventually stopping for lunch in the shade of a small tree between the dunes. Sitting there chatting about bikes and watching the desert finches’ flitter around us was a highlight of the trip.

Finally rolling into Mt Dare at 9.30pm, I was buggered but felt as though I had accomplished something genuinely worthwhile. The Simpson is one of those places that has to be experienced in order to truly appreciate it. It harks back to a simpler time where nature has the upper hand and you are forced to embrace your inner feral. As a consequence, a sense of community is forged amongst travellers regardless of how they choose to trek. To be able to do this trip with a group as good as Greg Yager the Ride Adv crew, well, that makes me feel very fortunate indeed.